When we talk about a sport that offers fast-paced, adrenaline-filled, and strategy-driven feelings, the name ‘Paintball’ always comes first. Paintball is a competitive team shooting game where the players knock out the opponents by hitting them with paintballs. The team members use low-energy air weapons called paintball markers.

This sport allows players to create their own teams, participate in communications, make practice schedules, and so on. If we want to mention one best paintballers, we could not.

There are so many best paintballers who have won the tournaments with their professional team. Today, we are going to share with you some best of the best paintball players and teams.

Oliver ‘Ollie’ Lang is a professional paintballer. He was awarded the international paintball player of the year award when his age was 22 in 2005.

He has played with various teams over his golden career. In 2002, Lang joined his childhood friends in the year-old San Diego Dynasty team. Then in 2006, he left Dynasty and rejoined Ironmen and earned six-figure payment.

Again, Lang rejoined Dynasty and won the first Paintball Sports Promotions (PSP) event in 2011. He is the best player in Pro paintball history and wins a three-time triple crown (PSP/NPPL/Millennium).

After winning the first NPPL event at Huntington Beach, Dynasty secured its 50th professional win. Splat magazine declared him the best paintball player in the world.

Konstantin Federov is one of the most versatile players in the game of paintball. He is from Moscow, Russia. This 35 years old athlete is considered one of the top three Russian superstar players and one of the world’s top 10.

Konstantin started playing paintball when he was 16 from a camp. He made it to the pro level by practicing with “Russian Legion”. He left the “Russian Legion” officially in 2012. He is known for his aggressive and crafty play style. Federov plays everywhere in the field in a dominant fashion. He is currently a pro player with 9122.24 points.

Russia, Tsunami, Art Chaos, Philly Americans, Russia BRL, NXL All-Stars East, KTM X-Bow are some of the teams for which he has been playing at different times since 2006. He is currently playing for the team “Houston Heat”. In one interview, he described Philly All-Americans as his all-time favorite paintball team.

Federov’s achievements are uncountable. He won his first world cup in 2005. According to the 2012 report, he has been to the final for about 38 different times. His team Huston Heat repeatedly won the world championship of paintball in 2018 and 2019.

Nicholas Neival is a famous paintball player in the USA. He was born on 13th June 1989, and his hometown is in Ashland, Massachusetts. Neival played paintball for a long time, and he is still playing very nicely. Nicholas Leival is famous for his strategy and great mind of paintball.

He started playing paintball officially in 2008. He played for Upton Crew in the very first of his carrier. Then in 2009, he joined Upton 187 crew. He left this Upton 187 crew in 2013 and joined Edmonton Impact in 2013. Then he joined Impact Love and played there till 2018.

Nicholas joined Kapp Factory in 2019. Then he joined in Edmonton Impact again, and he is playing there till now. He also had played for the United States.

He achieved many championships, MVPs, and two 1v1 trophies and became famous for his damage during Wall Era. He is a pro player now with 9092.16 points.

Nicholas is a good graphics designer, also. This journey of twenty years was just extraordinary, which is going on.

38 years old, Dave Bains was a famous player during his time. He lives in Elk Grove, California. He played for a long time and became the very best with his dedication and hard work. He is said to the best paintballer the world has ever seen. But until 2017, Dave Bains has started on his journey to be the best coach ever. He has slowly begun his transition from best player to a coach.

It started in 2015 where we saw Bain in the Millennium series. He didn’t play much, surprisingly. However, we saw him giving directions to the players instead. He was seen more in the sidelines than in the field as the professional paintballer he is.

Again, during the NXL event, we had seen him in the sidelines more often. He did play this but as frequently as he used to. Even then, he portrayed an outstanding performance in the field. He was ranked 1st of 16 in that event and scored a total of 1600, which is quite remarkable in that aspect.

Currently, he is a full-fletched coach rather than a player. This generation might see him be a great coach, but our generation will never forget him.

Berdnikov played with Russian Legion for eight years straight during the beginning of his career. Until in 2014, he left with some of his teammates. He moved to the Art Chaos, where he played for a year and adapted to a new team.

He played a large role in the Houston Heat and scored a large number of points. Even then, he came back and participated in the Russian Legions. It was decided that he was going to play for the Tontons in 2016 during the Millennium series.

In 2017, a year prior to his joining in the Russian Legions, he was ranked the 14th best player in the world of paintball. During 2019, he was showed a fantastic performance. Currently, he is still playing and marking the world with his outstanding performance in the paintball world. 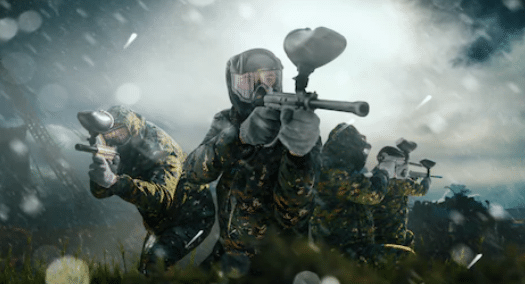 The Edmonton Impact is a Canadian-based team. The professional Edmonton Impact paintball team catches the attention after being crowned world cup champions at a Florida tournament.

The Edmonton Impact has won the NXL Paintball World Cup twice. The team beats another powerhouse named the San Diego Dynasty in the world cup. There are quite notable paintballers like KEITH BROWN, BRANDON CORNELL, JUSTIN CORNELL, JOSH OUIMET, etc. And the coach was DAVE BAINS, and the owner was BART YACHIMEC.

Team Tamp Bay Damage was founded in 2006. This is a team from Florida. The founder CJ Botsolas dreamt of building a world-class professional paintball team from Florida. They’ve kept a core group of members from Florida in their team. Their current team members are Jason FK Edwards, Chad Busiere, Tim Montressor, Bryan Smith, Daniel Holiday, Elias Rodriguez, and Jacob Edwards. Almost all of them are from Florida.

Damage is one of the most successful teams of PSP history. Before the 2014 season, they were in the top three in 7 of 10 events in which they participated. They either have won or been in the top three in 19 profession PSP events. One of their initial achievements was winning the Chicago Open in 2008.

Subsequently, they won PSP West Coast Open 2013, world cup and PSP New Jersey Open in 2011, and PSP Galveston Open in 2012. Recently they were unfortunately knocked out from the semi-final of NXL Las Vegas Open 2020.

However, the journey of this team wasn’t smooth. This team decided to retire from professional paintball in 2014 due to losing both funding and significant sponsors. Many players were supposed to retire, and some of them chose to play for different teams. But it didn’t happen. They did not quit and played the 2015 PSP season.

San Diego Dynasty, also known as the team Dynasty or only Dynasty, is one of America’s most prominent professional paintball teams. It is based in San Diego, California, USA. This team was founded in 2000 by Chuck Hendsch. Ryan Greenspan. And an American pro paintball player is the co-founder of this team. JT USA executive Chuck contracted with the players of team KAPP Factory about overseas competition obligations, corporate support, and the name Team Dynasty which initiated this team. The name “San Diego Dynasty” was adopted in 2006 due to league requirements.

This team holds three Triple Crown World Championships. They travel to teach and spread paintball over the world. Currently, they participate in the NPPL 7 Man Professional Division and The Paintball Sports Promotion race, and Millennium CPL Division.

In 2001, in NPPL LA Open, Team San Diego Dynasty was involved in an altercation with team Aftershock, which sparked a rivalry.

This team also has some notable alumni. This prominent team Dynasty is developing day by day.

Los Angeles Ironmen is one of the best paintball teams of all time, consisting of the best paintballers of the age. This paintball team made its debut in the Lively Series Championship in 1991. Later on, in the same year, they won the World cup NY and showed the world what they are made of in a professional 10-man game. Since then, it is hard for us to remember when we saw any other paintball team holding up the trophy. Until 2009, it was the only winning horse in its game.

Still now, this team has the best paintballers on their team with great rankings throughout the world. 2012 was a wonderful time when they became a consistent team for their nation. The 2014 World cup USA is proof of their outstanding performance throughout the decades. Robert Aviles, Keith Devit, Avelino Fernadez, etc. are few of the noteworthy players in their team. The 2017 Los Angele team consists of some great gems that have gained them a lot of victories over time. Todd Martinez was their coach during that time. Even in this time, the Los Angeles Ironmen reigns the Paintball world with their charms and performance.

The Moscow Red legion is said to the first professional team of Russia in the paintball world. It has taken up the world with a storm. It is the dream team of every best paintballer. It made its first appearance in 2003 with the World Cup.

Even though they didn’t win, they did win the audience’s hearts with the performance. It became one of the most promising teams at that time. In 2004, the Russian Legions won their first tournament in the Northeast Open. With this, they became one of the prominent teams in the paintball world.

Until 2010, they were the reigning Dynasty in this aspect. In the Phoenix open event, they lost their charm quite a bit but regained it quite early as well. In the same year, they won the Mid-Atlantic Open event.

Even, now they are considered one of the best paintball teams. They consist of the best players around Russia, as well as the world like Alexander Berdnikov, Alberto D’Egidio, Alex Lundqvist, etc. These players have got a lot of fame for years. Even in the 2020 NXL Las Vegas Open, they became the runners up due to their players’ hard work and dedication. The world will always remember this team as the very best it is.

How Much Do Pro Paintball Players Make?

Paintball is an excellent exercising game. But now it is not as famous as the past. Though the salary differs from place to place, players cannot earn that much.  Roughly, they make 10 to 20 thousand dollars in a year as wages. They earn this from sponsors and team owners.

But in California, a pro player can earn 65 thousand dollars. In New York, this amount is around 46 Thousand Dollars. But paintball is losing its popularity, which affects the wages and sponsorships of players. Their salary is not increasing.

A pro paintball player gets about 20-25 thousand from his salary. Sometimes they receive equipment from sponsors, and they earn money by selling them. Paintball is so costly, and it needs a considerable amount of money for a paintball tournament. Yet the salary is not wholly satisfactory and good enough.

Usually, people don’t come here to earn money. Most of the players work in other sectors also to make more money.

Did you get your favorite best paintballer on our list? Let us know which team is always in your heart. Please share with us which name should be on our list!