If you enjoy fast-paced combat games, paintball would be right up your alley. It gives you a sense of exhilaration and promotes teamwork and coordination. Besides, everyone needs to take a break from the monotony of life every now and then; and a game of paintball offers the perfect opportunity.

If you are a newbie, the game might feel a lot frustrating. There are a fair number of rules that you need to be aware of. Besides, the many different game variations that are available for this game can confuse a beginner.

To help you take your first steps in the world of this game, we have compiled a thorough guideline on how to play paintball the proper way and how you can improve your skill easily.

What Equipment Do You Need to Play Paintball?

Before we head into the rules and regulations of the games, we need to get our gears in check. For paintball, you do not really need a lot of expensive gear. If you head over to a paintball center, you can simply rent out the required gears.

The first thing that you will need is a paintball gun. For paintball guns, we recommend buying a personal one instead of renting it. That way, you will be able to get a better feel for your weapon and can utilize it to its fullest potential.

You then need to get paintballs, which are essentially ammunition for your game. These come in the shape of small capsules, and they are nontoxic and biodegradable. If you play in teams, make sure to use different colors of paintballs for different teams. That way, you can understand which team made the shot.

Safety masks and safety goggles are a must-have in any paintball game. In fact, if you go to a paintball field without this equipment, you will not be allowed to partake in the game. For paintballers, there are no-fog safety goggles available in the market that provides better visibility and prevents fogging. Read the best paintball mask review here.

Apart from masks and goggles, you should also get a couple of other safety gear so that you can enjoy paintballing without hurting yourself. Paintballs on exposed skins can hurt and even cause bruises to form up. Proper paintball attire includes full-sleeved jackets and pants.

Basically, you want to eliminate any skin exposure while playing this game. Some people even choose to wear athletic cups, which is great for a bit of extra protection for your sensitive parts.

You may also like: What To Wear To Paintball

As you may already know, there are a few different variations of paintball. Although the games are drastically different with a variety of objectives, the general paintball rules remain the same.

We will be taking a look at different variations of the game later on, but for now, you need to understand the general rules of paintball, especially if you are a first-time paintball player.

⇒ Can You Play Paintball In The Winter?

Tips to Become a Pro at Paintball

Knowing about the basic rules might be enough to get you started, but to become a pro paintballer, you need to understand different paintball tactics. You need to know the proper aiming techniques before you can expect to become a master at the game. 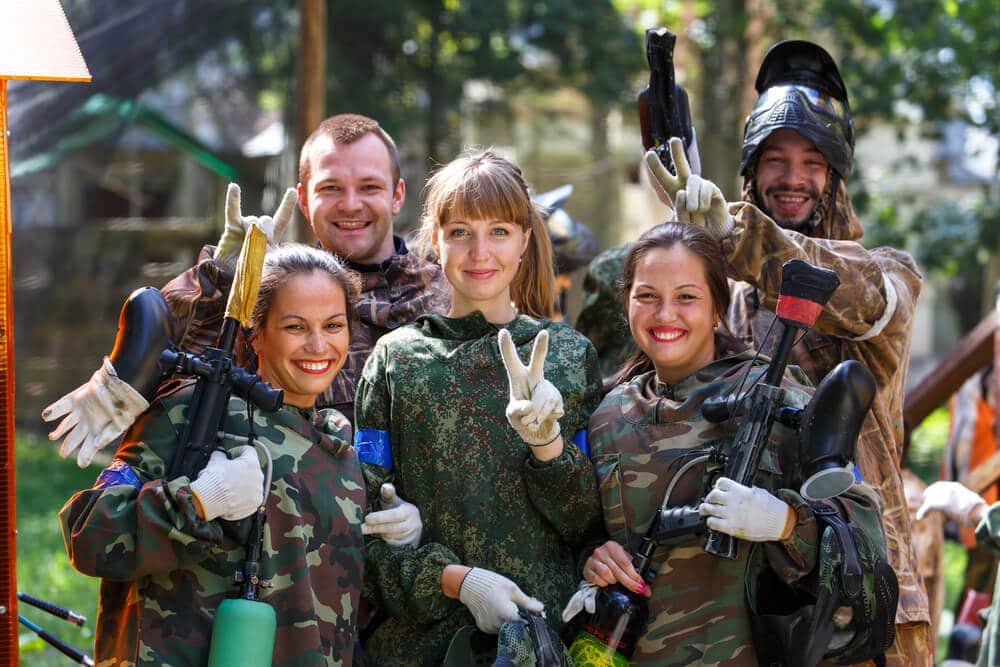 In the following section, we will give you a couple of handy tips to help you become a pro at the game in no time.

The problem with paintballs is that they are heavy. So, your fired bullet will drop significantly as it travels towards a target. As a result, you need to aim a little higher to compensate for the force of gravity. Furthermore, for moving targets, it is important to lead your shots so that you will not miss them.

For the best accuracy, you should try to aim for your opponent’s neck height. At that height, even if the bullet drops, you should be able to hit his chest or waist level to get a proper hit. You should not, however, aim for the face. First of all, it is not very sportsmanly. And secondly, in a lot of places, face hits do not count as a fair kill.

Paintball is a team game, and you must remember this. Going off solo while playing against a coordinated team is a surefire way to get yourself killed and thrown off the game. It is important to synchronize your attacks and movements with your team.

Even if you are inexperienced, you can make a lot of impact on the game by following the lead of an experienced teammate. Some teams make up code words that they yell out to get messages across to other teammates in the middle of a clash without the enemy knowing what it means.

Paintball is a fast-paced game, and the one who slows down usually gets shot. If you think that you want to find a spot and camp out there until you find your opponents, you will likely get shot sooner than you want. The game usually takes place in open areas with multiple flanking positions.

So unless you know the terrain like the back of your hands, you should always be on the move with your team. If you get separated, try to make your way to your teammates and regroup. You do not want to get caught solo, just standing around in the middle of a game.

Surely, stealth is a key element of this game. If you can sneak up on your opposition without them knowing about your attack, you will instantly be in a position of advantage. Before they even realize it, you will be able to knock out a couple of their members, which will cripple their defense.

Even during a clash, you can try flanking your opponents with a couple of teammates stealthily. Paintball pros tend to tackle the game tactically instead of fighting head-on. It is always a game of the mind and stealth more than brute force and manpower.

One of the most common mistakes that beginners make while playing paintball is not paying any attention to their ammunition. If you keep firing blindly, hoping to hit your target, you will quickly run out of ammo. So, it is important to be decisive while taking your shot.

You need to poke and shoot. Sometimes situations will force you to run and gun, which can waste some ammo. But if you are careful and do not fire blindly, you should not run out of paintballs. Ammo management is a critical part of the game, and once you are out of ammo, you are out of the game.

How Old Do You Have to be to Play Paintball?

Ideally, for playing paintball, a player must be at least ten years old. Younger players might not be able to keep up with the coordination that this game demands. Besides, since paintball bullets can hurt at close range, you do not want kids to play this game.

However, a special variant of the game called Paintball Lite is perfect for people under the age of 10. For kids of 7 to 12 years of age, this game is a better choice. The game uses slower and smaller paintballs to prevent bruising for the younger players.

As we said before, there are a couple of variants of paintball games. So far, we have covered the general rules of this game. Although the idea remains the same, the objective of the game varies depending on which type of game you are playing.

Here are a few of the popular game modes for paintball.

This is one of the most common game modes for paintball. It is an elimination game where you keep playing until all the members of a team are knocked out. You can also play this game solo with your friends, where the last man standing is the victor.

Another popular game mode is Capture the Flag. It is strictly a team game and requires coordination and planning to win. There are two different win conditions, and meeting just one will make you the victor.

Each team has a specific territory where they have to guard a flag. The task of a team is to capture the flag of their opponent and bring it to their own territory while stopping the opponent from stealing their own flag.

Furthermore, you can also win the game by wiping out the entire enemy team. There are no respawns in this game mode.

The Assault game mode is a fun and exciting paintball game with a time limit. It is played between two teams where one is tasked with defending while the other team has to attack.

There is a timer, and until it reaches zero, the assault team can keep attacking the fort. Once the timer runs out, if the assault is not successful, the defending team wins.

The Scenario is not exactly a game mode but rather a collection of different game types. It basically creates a specific scenario with specific goals for both teams. For example, in a “VIP” scenario game mode, a team has to escort a designated player to a location while the enemy tries to kill the VIP.

This one is not exactly a game mode but rather a different playing style. Although paintball is played in a large field with lots of covers, a speedball field is smaller and more open. As a result, you will have to play more aggressively and coordinate with your team to a greater level.

You can play all the different game modes we mentioned above on a speedball field. But because of the nature and design of the field, you will not be able to take things slowly and proceed with stealth. There are a few artificial covers, but they do not help you trying to tackle your enemy stealthily.

To get good at speedball, you need to get your aim under control. It is also a good mode to play paintball in the rain as the rain will help you with some of the barrages that the enemy throws at you. The best part about this variation is that the games are shorter and more exciting.

The Secrets Of How To Shoot Like The Pros

There are very few games out there that can match the level of excitement and stress release that paintball offers. Since you now know the rules and tips to become a pro, you should have no trouble picking up a paint gun and start a game with your friends and family.

However, remember that it is just a game, and do not forget to have fun.